A Review of Stones of Silence by Peter Grant 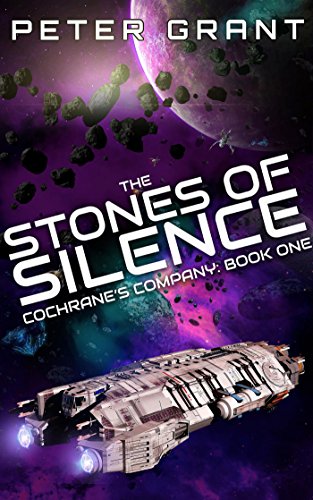 Stones of Silence is a recent book by Peter Grant. It is the the first book of a trilogy he released monthly starting in May, 2018. It is military science fiction set in the same universe as Grant’s Maxwell Saga and Laredo War. I have only read Take the Star Road, the first book of the former, but there were clear references to both series.

Andrew Cochrane is a retired Captain of the space navy of a system in the New Orkney Cluster. While Cochrane was removing a nasty group of smugglers he lost his wife to a romantic rival. The romantic rival and some of the smugglers were members of the First Families who are de facto royalty within the cluster. Thus, Cochrane was too good at his job and forced out of the service.

Cochrane starts a space security company with other veterans and a couple of civilians. Like Cochrane are not First Family members and have limited chances to advance in social and economic spheres. A new system, Mycenae, claimed by one system, Rousay, but not yet confirmed by the United Planets provides him with his first client. The government appointed corporation for exploitation and colonization of the system, NOE, needs to provide security in the system. Cochrane pitches his firm in exchange for NOE bankrolling his startup costs. He also negotiates the right to retain any property seized from illegal activity in the system.

The later is a dodge that centers on a key part of Grant’s universe. His cultures are for the most part very corrupt. The UP taking the claim under consideration means exploitation must stop while the claim is under review. Despite that fact, NOE is already mining and surveying. The novel opens with a raid by a rival corporation from another system. They steal NOE’s survey satellites which prompts NOE to hire Cochrane. Even he UP review process is a war of bribes between companies and governments wanting to delay the ruling while they grab as much as they can before the UP certified the claim.

Our heroes bluff, obfuscate, and outright steal their way into building a security firm. Their principle victims are the two corporations mentioned and one navy’s corrupt reserve fleet. In each case the victims can not risk making a fuss because it would make their crimes public. This tracks well with the first Maxwell novel whose main character also struggles against corrupt forces, while striving to get ahead. The difference is while Maxwell minimizes his direct exploitation of the corruption Cochrane uses it .

The one place where they overlap is the Dragon Tong. Chinese criminal organizations have a universal network in Grant’s universe. They provide several things, the most important being networking, to Cochrane and his company. An officer of the planetary navy from the Tong controlled planet also provides Cochrane’s love interest.

The book is fast paced. The principle antagonist of the trilogy, another space fairing criminal organization whose heritage is Slavic, appears at a decent pace. The second criminal organization provides the Laredo Saga crossover. They draw inspiration from the defenders of the planet Laredo. The first major conflict between the two provides the climax of the book. The battle and resolution are satisfying enough to make the book work as a stand alone story. They did provide enough interest for me to pick up the second novel.

I enjoyed this more than Take the Star Road. Maxwell came across as a bit of a Mary Sue, although I have learned this reflects a more British model for the series than an American one. Cochrane is much more American having a style not too far from Heinlein’s competent man or Piper’s citizen.

Three things hold me back from giving the book five starts instead of four. First, Grant’s universe is interesting and well developed, but is a bit bleak in how common corruption, nepotism, and shady deals appear. I suspect this reflects Grant’s South African heritage or even is more honest view of most of human history. It can be a little wearying every now and then. It isn’t enough to make the book bad or even average, but it does keep it from being great.

The other things are writing craft issues. Grant provides a large cast and some of them are more outline than character. This leads to some confusion about who is who at a few points. The other issue, also one of confusion, is the time line isn’t well drawn. I’m not sure if the books covers four or five months, which is what the pace feels like, or about a year and a half, which seems to match better with the span between events. Neither of these makes the book unreadable by any means, but did have me flipping pages a few times.

The “too long; didn’t read” version is this is a fun book of military science fiction about a new mercenary company building themselves from nothing by hook or by crook. It took me two days to consume, about a third of my normal time for a book of that size, and didn’t fade the next day. It got my attention enough to want to read the next book. It also has me looking to take a second dip into Maxwell or try Laredo.

Read if you like a fast pace space opera with characters whose morals are closer to Han Solo in the cantina than Luke as a Jedi.

Skip if you need lily white heroes, strong scientific accuracy, or lots of inner conflict (although there is some).

Signup for my once (5th or 23rd) and sometimes twice (5th and 23rd) a month newsletter to keep up with my books and my cats.

This site uses Akismet to reduce spam. Learn how your comment data is processed.

We use cookies on our website to give you the most relevant experience by remembering your preferences and repeat visits. By clicking “Accept All”, you consent to the use of ALL the cookies. However, you may visit "Cookie Settings" to provide a controlled consent.
Cookie SettingsAccept All
Manage consent

This website uses cookies to improve your experience while you navigate through the website. Out of these, the cookies that are categorized as necessary are stored on your browser as they are essential for the working of basic functionalities of the website. We also use third-party cookies that help us analyze and understand how you use this website. These cookies will be stored in your browser only with your consent. You also have the option to opt-out of these cookies. But opting out of some of these cookies may affect your browsing experience.
Necessary Always Enabled
Necessary cookies are absolutely essential for the website to function properly. These cookies ensure basic functionalities and security features of the website, anonymously.
Functional
Functional cookies help to perform certain functionalities like sharing the content of the website on social media platforms, collect feedbacks, and other third-party features.
Performance
Performance cookies are used to understand and analyze the key performance indexes of the website which helps in delivering a better user experience for the visitors.
Analytics
Analytical cookies are used to understand how visitors interact with the website. These cookies help provide information on metrics the number of visitors, bounce rate, traffic source, etc.
Advertisement
Advertisement cookies are used to provide visitors with relevant ads and marketing campaigns. These cookies track visitors across websites and collect information to provide customized ads.
Others
Other uncategorized cookies are those that are being analyzed and have not been classified into a category as yet.
SAVE & ACCEPT